Bhubaneswar: UK based Odia entrepreneur Arun Kar is making Odia’s proud with his revolutionary breakthroughs one after another. The tech entrepreneur who also is a military veteran and his business partner Chintan Panara has recently developed and industrialized real-time 5G Virtual Reality software for the spectators of world’s biggest motor racing held at Silverstone Racing Circuit in the United Kingdom. The 5G immersive experience provided through application software & activation area had let the spectators witness the races as if they are on the race circuit.

Silverstone Racing Circuit is a motor racing circuit in the United Kingdom where the legendary racing events like Formula 1 and MotoGP’s British Grands Prix are held. Recently, in the month of August, Silverstone hosted world’s biggest racing festival ‘The Classic 2022’ that featured the historic racing action from Formula One, Sports Cars, GT and Touring Car grids with over 20 races and demonstrations.

Providing an incredible insight into how major sporting venues will be able to enhance their audience interaction in the years to come, Silverstone is collaborated with industry leaders Xpertnest (Arun’s company) for a revolutionary project armed with cutting-edge technology.

The immersive futuristic 5G technology with real time 360 degree Virtual Reality on 8k resolution developed by Arun Kar’s tech company- Xpertnest, is a revolutionary technology for the spectators to watch the event as immersive as if they are present of the race track. 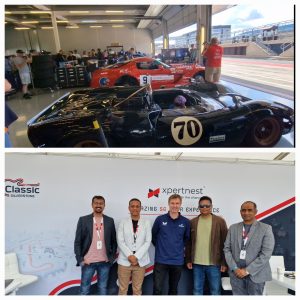 “Whether sitting in a trackside grandstand or at home on sofas, all those accessing the real time on their mobile phones via the App were treated to be on the race circuits as the grids of iconic cars head out onto the famous Silverstone Grand Prix circuit. What’s more the viewers were able to enjoy different perspectives of the show simply by moving their phones or VR headsets” said, Odia Entrepreneur Arun Kar and his business partner Chintan Panara who are also the founders of Xpertnest.

To make this happen, 360-degree cameras were centrally positioned in Silverstone’s paddocks and the race track throughout the festival. A portable full 5G network, live footage (real-time) was made accessible at an activation area at The Classic and globally via mobile phone or handheld devices via an app. Visitors to ‘The Classic’ were also able to watch the action on VR headsets which were available throughout the three-day festival.

Arun Kar is the son of Dr Manoranjan Kar (Ex-Vice Chancellor, OUAT) and Mrs Rashmi Rekha Kar. He is theCo-Founder of NesT Group- a diversified conglomerate designed across five subsidiaries, including Multinational Digital & Technology Innovation companies (Xpertnest) specializing in Information Technology & Environment Sustainability ( Earthnest). Recently, Arun Kar announced his new venture ‘Global Odia Connect’ a digital platform to unite the Odia community of professionals across the globe and bring them under one domain. For his incredible innovations, the Odia tech entrepreneur has been featured on Forbes, Fortune (along with Elon Musk) and has bagged many international and national recognitions.